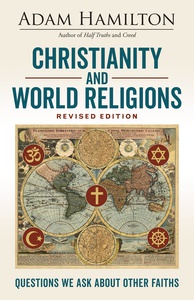 Pastor and best-selling author Adam Hamilton returns to one of his most popular topics, Christianity and world religions. This new, fully updated book explores four major world religions—Hinduism, Buddhism, Islam, and Judaism—and compares the beliefs of each with those of Christianity. He deals openly and honestly with questions people ask about other religions, such as:

In examining these major world religions and the beliefs of their followers, Hamilton urges us as Christians to build bridges with others so that we might grow in our faith, seek peace in our world, love our neighbors, and find positive ways to share the gospel.

Additional components for a six-week study include a new Leader Guide to help facilitate each weekly session and a DVD featuring Hamilton in new 10-15 minute segments, each including an interview with followers from that tradition.

Abingdon Press is an imprint of The United Methodist Publishing House, in operation since 1789. In the early 1920s, Abingdon began publishing a wide array of high-caliber academic, professional, inspirational, and life-affirming religious literature to enrich church communities across the globe. Now beginning its ninth decade, Abingdon Press has a commitment to providing the best, most effective religious publications available.